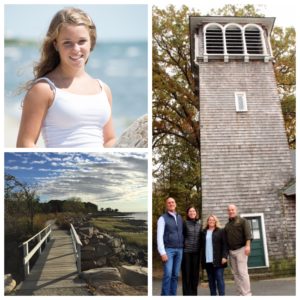 The pledge and restoration work on the Chimes Tower is dedicated to the life and memory of Emily.  Following the restoration of the historic Chimes Tower, the musical mechanism and bells system in the Tower will be known as “Emily’s Chimes”.   Further, the creation of a water safety center at the base of the Chimes Tower will further the Foundation’s mission to spread education, advocacy, and awareness of boating and water sports safety regulations and practices for adults and children.

Joe and Pam Fedorko, Emily’s parents and the founders of the Emily Catherine Fedorko Foundation, stated,  “We are forever grateful to have our daughter Emily honored in this way.  Emily loved music, and it is wonderful that ‘Emily’s Chimes’ will ring out over the waters surrounding Greenwich Point.  We can’t help but feel that her spirit will be watching over the waters of the Sound, and we are committed to making it safer for children and adults to enjoy water sports activities and boating.”

Chris Franco, President of the Greenwich Point Conservancy, stated, “We are so pleased to be working with Joe and Pam and their Foundation to honor the memory of Emily, and to include an important water safety component in the base of the Chimes Tower at the restored Chimes Building.  We are excited to be moving forward with this important project, which will restore, preserve and revitalize one of the most beautiful and unique late -19th-century buildings on the Connecticut shoreline. We are very pleased that the Emily Catherine Fedorko Foundation will be a part of the GPC’s project.”

About The Greenwich Point Conservancy

For more information, or to make a tax-deductible donation, please visit www.greenwichpoint.org.